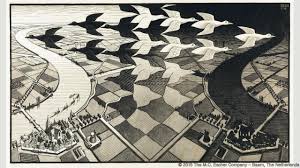 Like an MC Escher drawing, a good screenplay is an illusion.  It uses words on a page to convince readers to see something very different in their minds’ eyes.

The way language, grammar and punctuation are used in a script defines the reader’s experience of that script.  When it’s done well, a script is said to have a “voice.”  That voice is a distinct style and tone, usually crafted by the writer over years of experience.

When writing narrative and description, it’s important to find your “voice.”  When people talk about a writer’s voice, they’re talking about style and tone.

How a writer expresses him or herself is what connects him or her to the reader.  How a story is told – the words the writer chooses to convey his or her ideas – defines the experience for the reader.

This challenge is compounded in a screenplay.  The words must paint visual pictures.  They must do it efficiently and economically.  And they must convey the impression of how a scene is being directed – not just to the reader, but to actors, directors, cinematographers and producers who might be considering making the script – without actually doing so.

Trust others to do their jobs.

Many writers new and seasoned feel the need to convey what is being seen onscreen by directing the camera.  You’ll find scripts that contain phrases in the narrative description that say things like “Camera pans up…” or “Tight on.”

These phrases are incidents where the writer doesn’t trust the reader.  The writer is not just telling the reader how to imagine the scene, the writer is trying to tell the Director, DP and Cameraperson how to shoot the scene.

Don’t direct your movie from the page.

This is a pointless exercise.  Directors, DPs and Camerapersons are professionals who understand their craft way better than you.  Their knowledge and creative ideas about camera placement and visual construction will be much more imaginative and creative than yours – if only because they’re more likely than you to know what the latest technology offers, let alone their years of shooting movies.

Another reason to omit camera angles is that no one pays attention to them in a script.  A script is a blueprint; it’s a guide.  It’s filled with creative ideas and implied suggestions designed to inspire creativity in others.  It’s a recipe not a rule book.  It’s not written to dictate the work of others.  If that’s what you’re hoping for, then you should direct the movie yourself.

In fact, that’s the only time when camera angles are perfectly acceptable in a script – when you’re the writer/director!

Avoid the royal “We.”

Another version of directing through narrative is when a writer uses the “Royal We.”  “We pan over the mountains.”  “We see Chauncey for the first time.”  This kind of phrasing is often used as an attempt to convince the reader of how to see a scene in his or her imagination as well as suggest what kind camera movement the writer would like to see used in the scene by the Director of Photography.

Reading a script is a solitary endeavor.

You want your readers to feel like they are, literally, in the world of your movie.  You want them to identify with your main character and feel as if they were experiencing the main character’s journey themselves.

When you use the term “We” in your script, you are subconsciously reminding your readers that they are not in your story.  You are reminding them that they are firmly rooted in the real word,  reading words on a page written by the other half of that “We” – you, the writer.

Don’t let your work call attention to itself.

The best writing establishes a narrative tone then vanishes from the readers awareness as the creative expression of the script captivates the readers imagination and sweeps them away to the world of your script.

Next week, we’ll discuss one of the most effective and inconspicuous ways to accomplish this task.