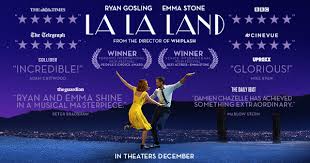 After Moonlight, the only movie we could look at next could be La La Land.   When Director Damien Chazelle first pitched this idea around town, there wasn’t much excitement.  The film initially started as a Sundance Film Festival short and later become the “almost Best Film” at last year’s Oscars.  This movie is a lovely, lovely gem.  But as a musical, it doesn’t easily fit into the tradition film structure.  The exception that proves the rule, it shows you that with the right story rules can be broken.

LOGLINE: Conveying the love and loneliness of life through the kind of kaleidoscopic daydream, LA LA LAND tells the story of an aspiring actress and a dedicated jazz musician who struggle to make ends meet in a city known for crushing hopes and breaking hearts, as they discover the joy and pain of pursuing their dreams.

THE NORMAL WORLD (ACT I):

Who is the MAIN CHARACTER?

This can be a tricky one to figure out, as this story is a true “two-hander.”  Still, there can only be one “Main Character.”  We meet Mia first, and she has more screen time devoted to her story.  While you could justifiably claim either as the main character, I would argue that it is Mia.

What is the main character’s INITIAL WANT?

Mia wants to be a working actress.

What is the INCITING INCIDENT that sets the story in motion?

Mia’s roommates drag her to a Hollywood Party.

After the Inciting Incident, what is the main character’s CONFLICTED WANT?

Mia goes to the party, but she doesn’t feel like she belongs there because she’s not a true artist.

Who are the FRIENDS/FOES with whom the main character debates his/her choice?

– Friends: Her roommates, Tracy, Alexis and Caitlin.
– Foes: Her boss at the coffee shop and every mean director she auditions for.

What SKILLS, TALENTS and DEFICIENCIES does the main character have?

– Skills/Talents: She can act, sing and dance.
– Deficiencies:  She lacks self-confidence.

What does is the CLEAR WANT that the main character has…?

She wants to be loved – by a boyfriend and tons of fans as a movie star.

What ACTION CHOICE does the main character make to obtain his/her want?

When she doesn’t get the parts she wants, she decides to write and produce her own play.

Who are the ALLIES the main character encounters?

– Mentor Figure: Sebastian; he inspires her to trust her artistic instincts.
– Mirror Figure(s): Sebastian, he is on a similar quest to his.
– Minor Figure(s):  Her parents, and her roommates.

Who are the ENEMIES the main character encounters?

All the naysayers that Mia encounters along her way to finding artistic success.

Who is the ANTAGONIST who prevents the main character from achieving his/her goal?

Mia’s story is one of “Woman vs. Herself.”  She is her own antagonist.  Mia the artist is in constant conflict with Mia the self-loathing critic who thinks she has no talent.

Who or what is the WANTED OBJECT in this story?

What is the MIDPOINT SHIFT that allow the main character to take effective action?

Mia realizes that if she doesn’t believe in herself then no one else will, so she rejects her doubts and commits to doing a one-woman show.

Based on the main character’s epiphany what ACTION COURSE does s/he take?

What action does the antagonist take to create the RISING CONFLICT?

With Sebastian on the road, Mia begins to obsess about her play as her fears and doubts about her artistic ability swell within her.

How do the STAKES INCREASE?

With the play opening, Mia can’t deny her fears.  She admits to being terrified of what other people think of her as an actress.  When she performs the play, she can hear the audience disparaging her while she’s onstage.

What is the PERSONAL LESSON the main character learns from this experience?

Mia learns that she must face her fears and commit to her art if she’s going to be a success.

What is the LOWEST MOMENT in the story?

The play is an utter flop.

How does the main character react in his/her MOMENT OF WEAKNESS?

Mia gives up her dream and moves home.

What MOMENT OF RESILIENCE that enables the main character to continue?

After Sebastian convinces her that she has talent, Mia goes back to Hollywood to give it another shot.

What is the FINAL ACTION CHOICE that the main character takes?

While auditioning for a part, Mia abandons all pretense and tells an honest story that expresses her intense desire to become an actress no matter the cost.  After Mia auditions and she is waiting with Sebastian, they both know that if she gets the part she will choose the role over remaining with him – which is what we find out happened.

How are the SUBPLOTS RESOLVED?

Because this is a musical and so much time is dedicated to song and dance, there are very few subplots to be resolved.  This is rare, but as a musical this is a rare script.  While the main plot is the story of Mia and Sebastian’s relationship, the subplots are what happens to each of their careers.  Mia becomes wildly famous, marries and has a child.  Sebastian becomes the jazz musician and club owner he always wanted to be.

What is the CLIMAX of the story?

The climax in this story is subtle but poignant.  When Mia and her husband David wander into Sebastian’s jazz club, Mia realizes where she is and watches Sebastian play.  Mia – and Sebastian – see each other and think of what might have been.  The climactic moment comes right after when Mia chooses not to stay and talk to Sebastian; instead, she choose the life she has without him.

What is the CHANGE that has occurred in the world of the story?

Both recognizes the love and the sadness in each other as they both know they are living the lives that they should.

How is the RESOLUTION ARTICULATED at the end?

As I said at the beginning, this script breaks almost every conventional rule of screenwriting — yet, the spine can still be found.  While a great success, the film was polarizing.  Many people loved it, some did not.  Perhaps it was the unconventional storytelling that left some people less than satisfied; but for others, the risks were well worth it.

If you’re a beginning writer still learning the fundamentals of screenwriting, use this film to inspire you to hone your skills until you’re able to understand the rules of writing so well that you feel confident breaking them.  If you’re a seasoned writer pushing your boundaries and trying to tell an unconventional tale, let this film be an inspiration for you to write fearlessly despite the naysayers.

And remember, the reason we do these breakdowns is to learn how to see the bones of the plot beneath the flesh of the story.  If you have a movie you’re having a hard time breaking down, write me and I’ll post my take on what I think the important plot and story points might be!