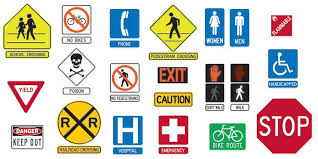 Continuing our discussion of Semiotics, if you think about it, a film is made up of nothing but images.  Made up of light or pixels, these images and symbols along with music, effects and dialogue are the building blocks of your screenplay in its realized form.

Using these images and symbols creatively and judiciously is where the art of screenwriting lies.  Dialogue, images, sounds, music and more are the tools that enable you to engage a reader in your script and evoke the response that you want from them.

This what “Semiotics” is all about.  Semiotics is the study of how signs and symbols affect human beings as they try to communicate ideas to one another.  If you’re interested, there is an entire school of thought and tons of  literature out there.  Right now, let’s take a look at the basic principles of this thought to see how it can help us as screenwriters.

On one level, the most meaningful signs are those that complete an idea.  Like an international traffic sign or words in a sentence.  These units or “signs” each consist of a signifier and a signified.   The signifier is the object in question and the signified is the meaning that it implies.

But for the signs to have any meaning, there needs to be an audience.  Someone has to see these images and want to understand them.  In film it’s the relationship between the image and the person viewing it that gives that the “symbol” its power.

Like Schindler atop his white horse or the Starship Enterprise in the depths of space, these iconic images leave us with lasting impressions.  A tear rolling down a cheek; an alien finger glowing at the touch; or a shark fin rising to the surface – each triggers a response based on what those images mean to us.  When done well, these signifiers tap into a greater collective human experience that unites us through the shared experience of the movie we have watched.

On the other hand, when we don’t share that collective knowledge base, a symbol can be lost.  Language is a perfect example.  If you don’t speak or read English, you have no idea what these words that I’m writing mean because you have no relationship to the words and have no idea how to interpret them.

As the screenwriter, you have to understand both.  You have to take into consideration what you want the images you put into your screenplay to “signify,” and you must evaluate how you think the audience seeing the movie (or reading your script) will interpret that information.

On a deeper level, the symbols that make up those objects I just mentioned are made up of parts that are symbols in themselves.  Assuming that a viewer has a relationship to an object of visual sign, there is the “sign” and the elements that create that sign.

In language, that would be the letters I’m using to write these words.  On their own, a letter may or may not mean anything.  But when I put them together to make words, symbols are created with which a viewer like you has a response.

Take the letter “n.”  Outside of mathematical formulas an “n” means very little.  However, when I add an “n” to the word lighting, I get lightning – which is similar but not the same thing.

Another example is the emoji.  A yellow smiling face in a text message communicates the message that the person sending it is pleased about something.  Because you have a relationship with the person texting you and because this emoji comes out of the thread of your texts, you know what it means.

In other words, there is a context.

Next week, we’ll examine how this context works in film.  Until then, think about your favorite movies.  What are the images that you remember?  How did they make you feel?  And why?