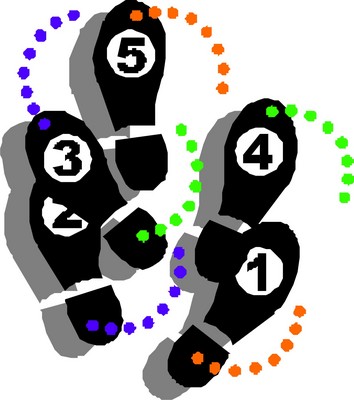 One Foot in Front of the Other

A good logline is the first step in putting the pieces of your screenplay together.  You need to know where each step is going to land in order to fill in the shimmies and shakes in between the hard landings that make your script special.  But first you need to know the pattern your trying to follow.

Here’s a quick list of the main points in your plot that are essential to know as you build your story into an exciting screenplay:

The Spine of the Story

The above 7 elements are the vertebrae of your story.  They are the bones of your plot that keep your reader’s imagination and interest engaged from start to finish.  They are also the bones upon which you hang the “meat and sinew” of your story.

Flushing Out the Spine

When building your story, there’s an exercise I like to you to make your ideas concrete and test whether or not they work.  Write 4 short, concise paragraphs.  Each paragraph represents an act in your story.  Try to capture the core points of your plot without getting bogged down in story.  Use very simple sentences.  No more than two or three sentences for each paragraph.  No more than 500 words total.

Who is your MAIN CHARACTER?
– Make sure to use an adjective that capture’s your character’s attitude/point of view.

What is the INCITING INCIDENT?
– What event happens that sets your story in motion?

What is your main character’s ACTION CHOICE?
– This will take him/her into the new world and be resolved in the climax of your story.

Who is the ANTAGONIST and WHY do they want to stop your main character?
– The stronger the antagonist, the more drama your story will have.
– The antagonist must have a motivation that makes logical sense.

What LESSONS, SKILLS and ALLIES does your Main Character acquire?
– What does s/he learn and who helps him/her?

What is the MIDPOINT-SHIFT for you main character?
– what does s/he learn that helps to focus his/her ability to achieve his/her want?

What ACTION does your main character choose to take ?

What is your ANTAGONIST’S RESPONSE?

What is at STAKE?
– This is the rising action of your story.

What is your main character’s FINAL ACTION CHOICE?
– this choice makes the final climax with the antagonist unavoidable

What CHANGE occurs as a result of the climax?
– This should be the opposite of the adjective that you used to describe your main character in Paragraph One.

Here are three examples of famous movies broken down by their Plot Spines.  This is how your “Flushing Out the Spine” Exercise for your story should look.

JAKE GITTES is a jaded, seen-it-all detective who is hired to do a job by a client.  When that client turns to not be who she said, he wants to know who set him up.

He chooses to find out why Hollis Mulwray was killed.  Helped by Evelyn Mulwray, he learns about a scam to reroute water in Los Angeles and that Evelyn’s father Noah Cross is behind it.

Confronting Noah Cross, Jake realizes that Mulwray’s murder wasn’t about water, it was about the girl that Noah wants and Evelyn is trying to protect.  Jake tries to help Evelyn, but Cross’s men try to stop him and Jake realizes he’s made things worse.

Jake comes up with a plan to help Evelyn and her daughter escape, but Noah Cross outsmarts him.  Noah confronts Evelyn and Jake in Chinatown where Noah gets the girl and Evelyn is killed.  In that moment, Jake realizes that people will do things that he can’t comprehend.

A whiny kid, LUKE SKYWALKER finds a plea for help from Princess Leah to find Obi-Wan-Kenobi.  When his Aunt and Uncle are killed, Luke wants revenge for their deaths.

Luke chooses to go with Obi-Wan to become a Jedi Knight and stop Darth Vader (who’s men killed Luke’s Aunt and Uncle).  Luke sees what the rest of the galaxy is like, meets Han Solo and Chewbacca and is introduced to The Force.

Luke arrives at the Millenial Falcon and learns that Alderaan has been destroyed.  While Luke learns how to use The Force, Darth Vader traps the Falcon in its tractor beam.

Luke joins the rebel assault and uses The Force to defeat the Death Star.  Afterwards, he becomes a Jedi Knight and is recognized as a hero.

On a drive to New York City, cynical Harry meets and practical Sally.  When Harry later bumps into Sally and both are single, Harry wants to be closer friends with Sally.

Harry and Sally spend time together, learn about each other and become good friends.  They each bring their best friend into their social circle.

When Harry sees another guy kiss Sally, Harry wants Sally and ends up sleeping with her.  When Harry can’t commit, Sally dumps him as a friend.

Alone on New Year’s Eve, Harry finds Sally and admits that he loves her.  They kiss and fall in love.